I recently noticed a want to buy ad for a GLR on BentriderOnline. This got me thinking about whether I really needed my GLR. It was fun putting it together and updating it, but with 2 velomobiles and a couple of other trikes available, I just wasn’t riding it. So I contacted the buyer and worked out a good deal. The GLR will soon be cruising the streets of Florida.

I’m selling my brother’s Catrike 700. This is the Candy Blue 700 that I built for myself in 2013. My brother adopted it from me a few years ago but has decided to stop riding. The price is $2000 shipped to the continental USA or $1850 if picked up within 50 miles of Santa Barbara, CA.

Here are some photos.

This is an area on the bottom side of the cross member where the chain was allowed to drag against the frame.

Here are some notes about receiving and setting up the WAW:

Drive Components
I purchased the WAW without drive components so that I could use my own. Installing the drive train was very straight forward. It’s so easy to work on. I had a small problem with the bottom bracket. The threads were not cut very cleanly. I don’t have bottom bracket taps so I took it to my local bike shop and had them run the taps through it again to clean up the threads. Not a big deal. It was a little tricky to install the chain but it didn’t take long once I figured out how to do it. I had purchased the wrong front derailleur. I had assumed that it would be the clamp on type as was the case on the DF and the Milan. So I had to order a braze-on type derailleur. This was my fault for not noticing this in the photos. Again, this was not a big problem.

Bodywork
The quality of the carbon fiber work is excellent. I make some of my own carbon fiber parts and I have to work harder to match this level of quality. The gel coat is beautiful – except for the nose. For some reason, a section of the nose was not polished correctly so it was very dull, still having fine scratches. It stood it out next to the rest of the polished gel coat on the main body. I believe that I will be able to polish it to match the rest of the WAW.

Setup
The seating and boom length were set almost perfectly. Even the mirrors were adjusted correctly. I checked the front end alignment and it was perfect. The electrical system works perfectly. It is obvious that Katanga does a good job testing everything before it leaves the factory.

Ginkgo Front Wheels
I paid extra to upgrade the front wheels to Ginkgo wheels and machined drums. I removed the front tubes to replace them with latex tubes. I was surprised how difficult it was to get the Pro One tires to seat on this model of Ginkgo rims. I had to use soapy solution and a lot of pressure to get them to seat properly. I have not had this problem with other wheels from Ginkgo. I’ve added a small bottle of soapy solution to my toolkit in case I have a flat on a road. However, I doubt that I can get enough pressure using the small travel pump to seat the tires in this situation. I’ll have to use a CO2 cartridge pump.

Ride
I took it for a short 10 mile ride yesterday. It was very comfortable. It handles great through the fast turns. I didn’t feel any tendency to lift the wheel. It felt comparable to my DFXL and Milan GT in that respect. The lack of rear suspension was hardly noticeable on this particular ride. We’ll see if it bothers me on future rides outside of my local roads. My top speed was only about 30mph, but at that speed it felt very stable. I have had several side stick steering trikes in the past. The steering motion took very little effort. I was surprised by how much effort it takes to move the levers on the WAW. I see that the reason for this is that the pivot position is very high up the stick so that there is not much leverage to move the stick. It’s not a problem, just different than I had expected. It won’t be a problem.

WAW No. 407 arrived today. I ordered it without a drive train so I’ve got a bit of work to do to get it on the road. 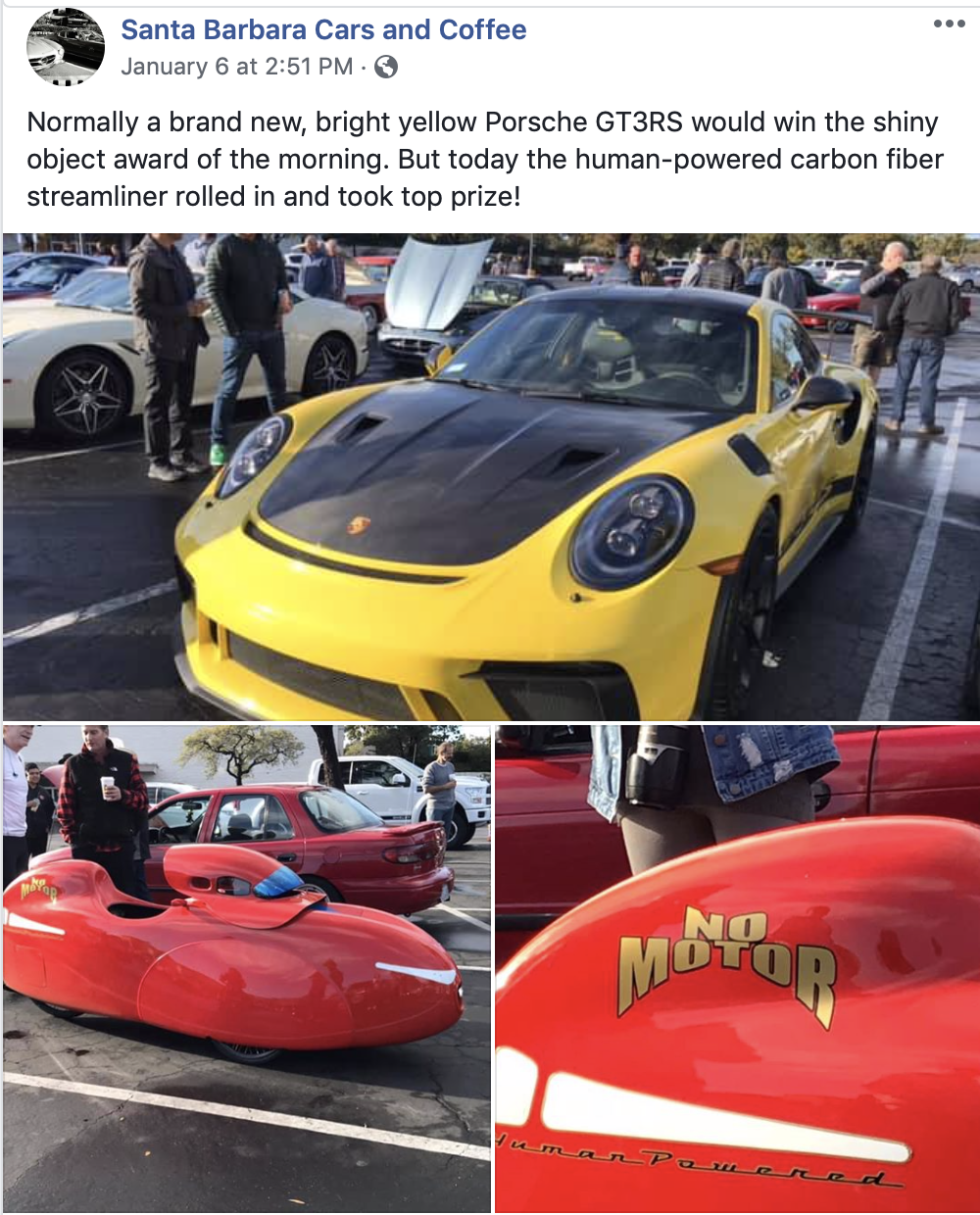 A big box arrived from the Netherlands the other day. IntercityBike finally sent my order containing some pants and another set of front wheels for the DF XL. The pants enclose the front wheels and are supposed to give a nice little speed gain at the higher end. Front wheel clearance is a bit sketchy with the pants so Ymte at IntercityBike recommended a set of narrower offset front wheels.

Ymte provided some very thin tape, Nitto 21, to attach the pants. I decided to try something a little more substantial so I’ve gone with magnets. Here you can see the magnets glued to the pant. Mating magnets are taped to the inside surface of the DF’s interior.

In these photos you can see that I actually did tape the seams using red electrical tape just to be safe.

Since retiring, I’ve been having fun designing and building new pieces for my DF XL. Here’s a little update on these designs.

The idea here is to be able to use the race cap (hood) more often to boost my speed. Up until now, I could only use the race cap on very cold days due to the heat and steam that builds up inside. Adding a new air inlet in the form of a NACA duct to the front access panel should help solve that problem. It definitely moves a lot of air so it succeeds on that goal. Now I need to do some roll down tests to see if the extra drag created by the duct offsets the benefit of running with the race cap. It might turn out to hurt more than it helps. I’ve posted more details here… 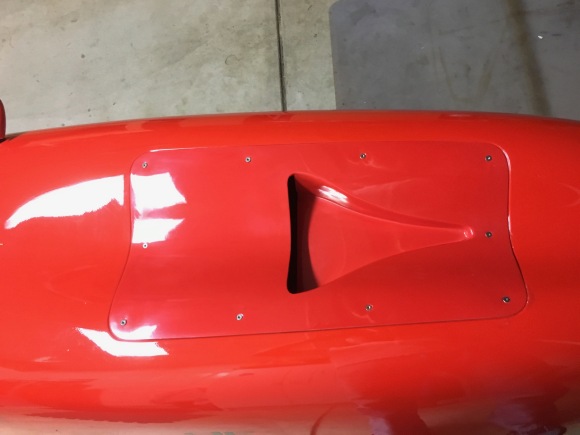 I decided to go back to the very small stock Zefal Spin mirrors. I never liked the way they looked. I also thought that their aerodynamics could be improved. At the urging of PeterB on BROL, I designed this little mirror cover using Fusion 360. I doubt that it will make any difference at the speeds that I travel ( ~20 – 25mph most of the time), but I think they look a little more finished.

I first saw these on my former Milan GT. Then I saw that Ben Dover on BROL had put these on his DF. The heel bumps are the first things to scrape going up driveways. They’re compound shapes so making a guard from flat ABS plastic sheet is a bit tricky. So I took some measurements of the heel bumps and shaped this mold from some rigid foam. This allowed me to heat up the ABS sheet and press it into shape.

The wait begins. I placed an order with Katanga in the Czech Republic for a new WAW velomobile. It should be here in mid January if all goes well. I’ve heard great things about the WAW, but it is a bit on the heavy side. I ordered it with full carbon fiber construction and without rear suspension in order to save weight. If the solid rear end doesn’t work out, rear suspension can be added at a later time. Here’s a photo of a WAW similar to the one I’ve ordered.

My WAW will be this color blue but will have black visible carbon fiber wheel covers (instead of the matching blue). Also the lights in the nose will be laid out a bit differently as shown in the red WAW below.

I’ve recently made a quick decision to sell the Milan GT. I hadn’t planned on selling it so soon, but when I read that a fellow BROL member was planning to order a new one, I started thinking about other velomobiles that I might want to try. I messaged him and we struck a quick deal. The Milan GT is a fast, well-handling velomobile. For some reason, though, I was always a bit faster in the DF XL.  So the Milan GT is heading to Connecticut. Now the research starts for the next velomobile.

I’ve been thinking about adding a windscreen to the DF XL. IntercityBike sells one that is attached using velcro. It is a simple shape that sort of fits any velomobile. I believe that it is this one sold for Quests: 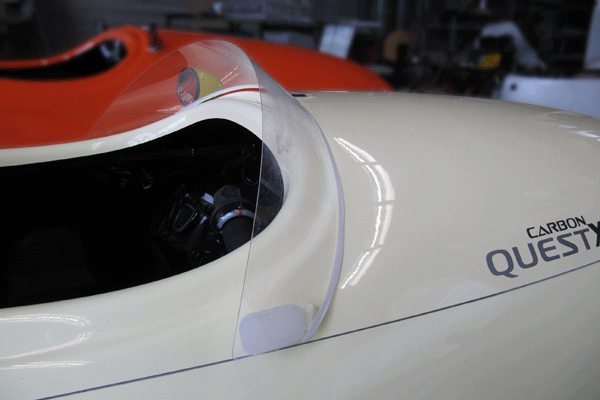 I’m sure this works fine but I don’t like the way that it fits nor the use of velcro, which remains stuck to the body even if the windscreen is not in use.

So I came up with a shape specifically to fit the DF XL. Instead of using velcro I’m using magnets. This is a cleaner and more secure way to attach the windscreen. Here are some photos:

It is made with 0.030″ Lexan so it’s pretty light and flexible. It does get in the way a bit getting in and out. It turns out not to be a problem since it just pops on and off so easily with the magnet mounting approach. There are magnets glued to the windscreen and magnets stuck on the inside of the body. I just have these body magnets taped for now.
The windscreen does seem to add some speed, maybe 1-2mph at the high end, but that’s just a guess. You do look through it while riding, so scratches may become a problem. It can get warmer in the cockpit since it reduces air flow into the cockpit. In that case, it’s easy to just pop it off and stash it while riding.
Here is a larger, wrap-around version that I’ve been considering. This one will take a much larger piece of Lexan.