I recently sold off some trikes and bikes and was down to just one trike, my Trice Monster. I sometimes like to blast down some long mountain roads which can be pretty tough on a trike. I’d like to avoid that wear and tear on the Monster. I started to think that a trike like my old Pseudo Monster would be perfect. It was a fast trike with great handling and it was not as scarce as an original Trice Monster. So I posted a Want To Buy add for a 2005 ICE S or a 2006 Trice S on BROL. A Trice S is a perfect starting point for  building a trike similar to the Monster. It’s frame is longer than other Trices of that time. This allows for mounting the seat in a laid back position. The longer wheelbase also adds to the high speed stability. Also, it is as narrow as the current VTX but not quite as narrow as the Monster.

After a few false starts, I ended up trading for a 2005 ICE S. Included in the trade were a 2012 Vortex rear frame member and a set of Ginkgo-built 406 front wheels. This is the exact combination of parts that I needed to kick off another project trike. I’ll call it the Trice Special for now to distinguish it from the original Pseudo Monster.

I had many of the parts that I needed and bought the rest of the parts online and from Bent Up Cycles. While I was waiting to get the frame back from the powder coater, I put together a set of wheels so that I could get the trike up and running quickly. I had a nice 700 rear wheel from a previous project and the Ginkgo front wheels that came with the trike. With this wheel set, it’s basically equivalent to a 2012 Vortex. It has the Trice S cruciform, steering and boom. The rear section and seat is from a 2012 Vortex and the wheels are stock Vortex size.

To get back to the Pseudo Monster idea, I will be building a set of wheels consisting of 355 fronts and a 559 rear. This should drop the whole trike a bit and improve handling due to the lower center of gravity.

Here’s the donor Trike. Notice the Ginkgo front wheels with machined and black anodized Sturmey Archer drum brakes. The bits that made it to the “Special” are the cruciform, front wheels, steering (minus the stock tie rods), hubs and boom.

Here are the first pictures after powder coat and assembly with the larger Vortex size wheel set. A 559 rear and 355 front wheel set is coming soon. 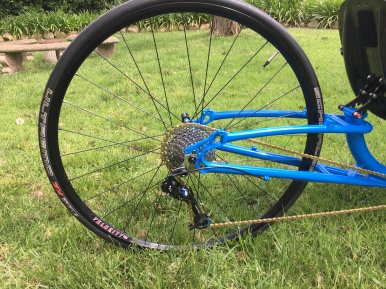 Of course I had to add my own stickers. Coming up with the original Trice logo was pretty tricky. 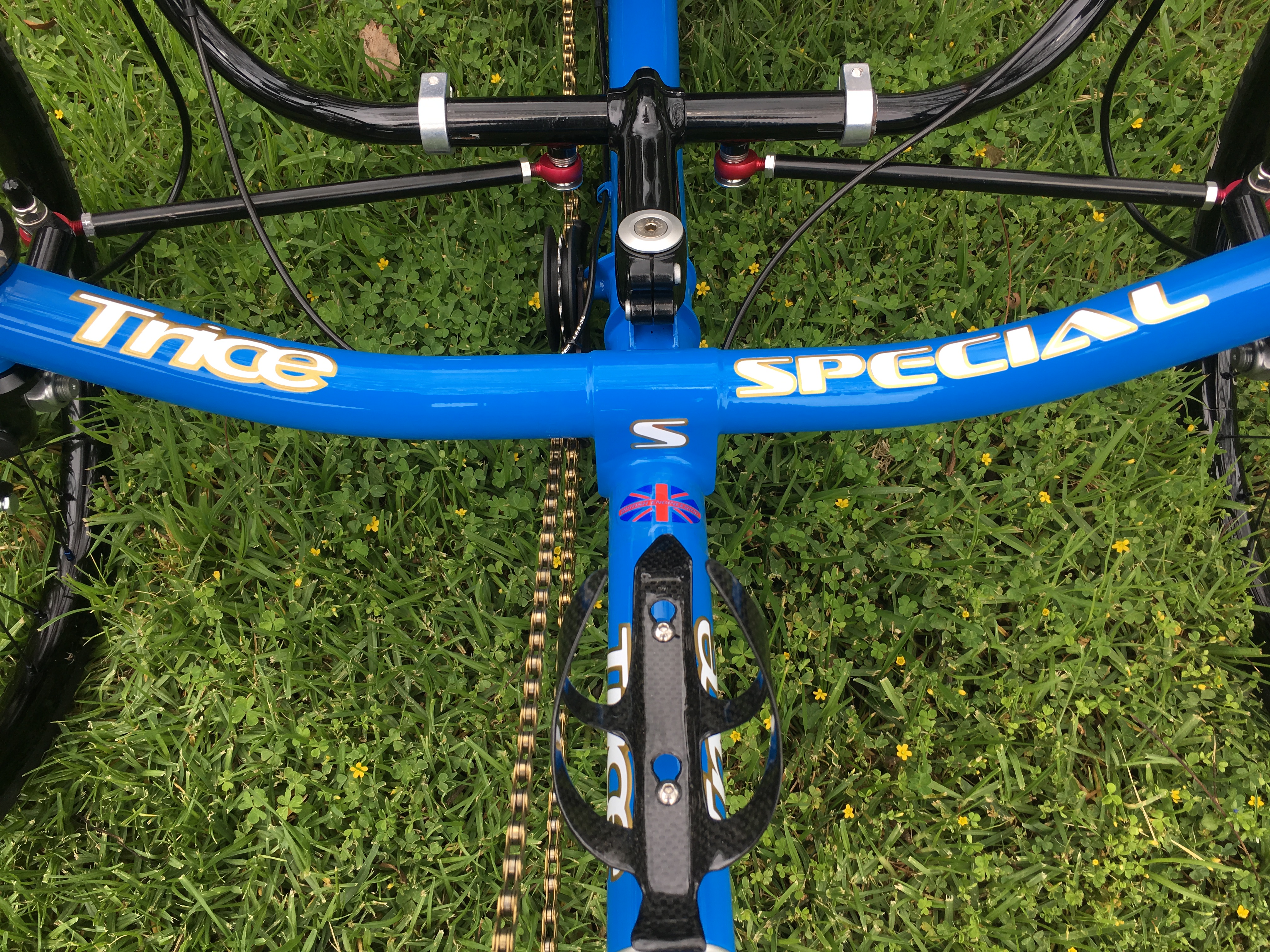 Update: I’ve been playing with different wheel sizes. I built a set of 355 fronts and a 559 rear. However, after getting used to 406 fronts, the 355s with Kojak tires felt like they just didn’t roll as well as the 406s with Schwalbe One tires. In this photo, you can see that I’m running the combination of 406s up front and the 559 at the rear to lower it a bit. I’ve also upgraded to new ICE Sprint handle bars. The changed curvature allows for a tighter turning radius by providing more clearance of the seat during a turn.

My wife has recently decided to take ownership of the Trice Special. I’ve had to shorten it up and install an ICE mesh seat for her. 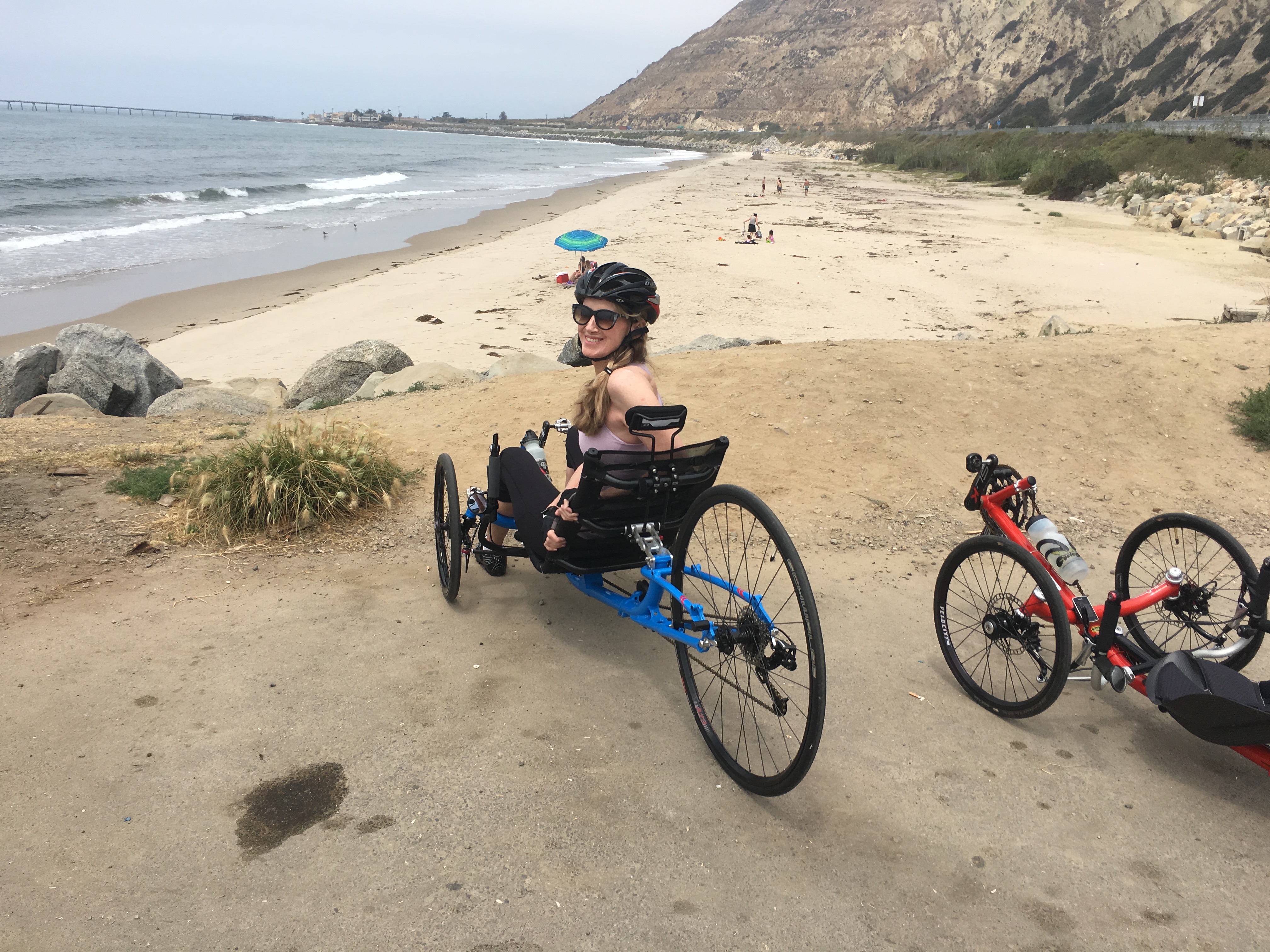 The Special has been sitting dormant while my wife is resting her bad neck. So, I’ve reconfigured it to my specs and installed a Copenhagen wheel (provided by my friend Dawn). Now it’s Lulu’s dog trailer hauler.