With the encouragement of my friend and Alleweder pilot, Bill Maguire, I’m getting interested in buying my first velomobile. My interest in velomobiles is not so much for commuting and going to the market. It’s really about riding faster. I realize that a velomobile is not the first choice for rides with a lot of climbs, but could be a lot of fun on rolling hills rides and the ride from Carpinteria to Ventura with the new coastal bike path is finished. With that in mind, on my short list are the Milan, Strada DF, Evo K and Quest. All of these are head-out, go fast velomobiles. I’d probably consider the WAW, but they don’t seem to be available in the U.S. Also, the early WAW that I saw at Bent Up Cycles a few years ago looked to be pretty poorly constructed to my eye.

I took the opportunity to head up to Los Osos for the 2014 LCVMG to see some velomobiles first hand. There were quite a few Quests, an Evo R and a Milan among some Alleweders, a Borealis, a Velocity Velomobile and some home grown coroplast machines. I wasn’t able to ride/drive any of them as there was just a little time available before they would all head out for the ride.

Here Steve Schleicher, builder of the Canadian Milan, is showing me the details of the Milan. I have to say that it looks great in person. He explained how the gel coated shell is constructed with a sandwich of carbon fiber and kevlar. The tops of the front shock towers are reinforced with kevlar where the strut pokes through. This velomobile is a strong contender for my dollars. I really like the shape, the low seating position, the very nice  details like the aero mirror covers and fared rear blinkers. I am a fan of the tank-style steering having had the same setup on my Greenspeed SLR.

There are a couple of negative aspects that I learned, but no show stoppers. One thing is that there is evidently no space for a long cage derailleur – only a medium cage. This limits the size of the largest gear on the rear cluster. Steve said that he was able to get a 34 tooth gear to work on his 9 speed setup with a medium cage derailleur. Fixing flats can be challenging with the fully enclosed wheels and the rear 2-sided swing arm. Steve assures me that with a little practice it only takes 5 minutes. I’ll believe him on that.

Here you can see the nice work on the mirror cover. Also notice the light colored kevlar on the interior of the outer shell. The front fenders and ribs are carbon fiber without the kevlar layer. The tank steering levers are familiar to me, however, they did feel like they were positioned further back than I’m used to. There’s no room to move them forward though.

Here Craig Johnson shows me his beautiful Quest. I love how he keeps it spotless and polished. The glossy carbon fiber interior looks as beautiful as the red outer surface. Craig gave me a lot of information about the Quest. I’d say the fit and finish is better than I expected – really first class. The Quest has been around a long time and there are a lot of them out there. Craig explained that Velomobiel.nl has continued to evolve the design over the years so it keeps improving. This is a very impressive machine. 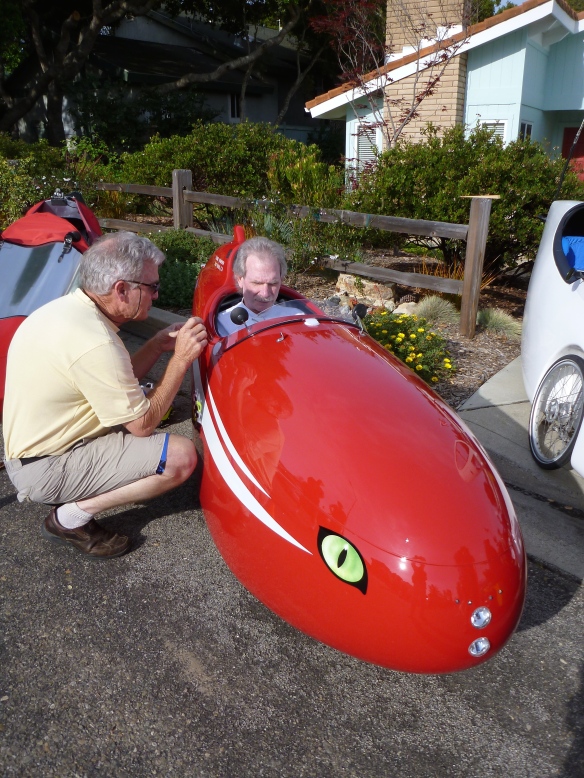 One negative aspect of the Quest design came up in conversation with Craig and another Quest rider (with a scratched up Quest). Evidently the rounded shape of the Quest makes it vulnerable to developing lift and flipping over in a cross wind. It seems that designs with the twin hump front end design, like the Milan, AW, Evo K and Strada DF, are less likely to develop lift in cross winds. This really got my attention.